In my restless dreams I can still see that “somewhere” that I kept visiting, but have no idea of where it might be or what this all meant. The only thing I seemed to be sure of was that I was safe there and that the only person living there was a friend. How I could know all this was beyond my understanding, but then in another of my dreams I saw him and I was absolutely certain and finally felt completely at ease. I recognized his Spanish Uniform, the same they used to wear in the XVITH century with its armour and big collar. He was sitting at the end of a large wooden table. I could not see his face, but I somehow knew he was a friend or at least I thought he was… The Cavern was situated inside a Cliff where a large, solid, wooden door barred the entrance; the riptide constantly broke against it with an even rhythm as if to remind me that time was going by quickly. These were the feelings that pervaded me, but no matter where I searched for an answer, all I could find was obscurity, darkness all around, even the sea did not reflect a thing. All this however did not seem to bother me. I was calm as if I had returned to a place that had once been familiar to me. I was seeking an answer to my questions and doubts; was it the sea that had brought me there or was it the Cavern that was calling me? Slowly I was beginning to understand; the sea that seemed so rough and hostile was a dimension in my dreams where I was able to enter that “somewhere” far away in my mind. A place where I had already been and where the time had come to return to in order to really understand, but most of all, the time had come to remember; remember that other places exist or should I say other worlds, parallel universes, that we can visit again and again, once we are able to look into our long lost memories . Without saying a word, I went towards the large, wooden door and there was no need to knock, it was already open. The Spanish Soldier said, “Welcome back. I have been waiting for you for a long time, not everyone is able to remember and to return; very few cross the passage more than once in a life time.” Slowly once again things seemed to finally become clear; my memories, happenings that did not belong to this life, my tormented dreams searching for the truth, the Cavern that concealed the passage and the Spanish Soldier who was the Guardian of the Entrance. It seemed as if the various parts of my body and soul had finally gotten back together for good. What I would find from the moment I stepped in was a mystery to me, but the only thing I was certain of was that nobody and nothing was going to stop me from entering and so I took a step forward; colours began to mix into each other; I heard sounds that I did not recognize or that I had probably forgotten; I felt scared and happy at the same time. Where was I? I did not know which dimension I had entered, but it felt as if I had reached the end of my journey. I was now in an abandoned garden. It was night, but with the help of the moonlight I could distinguish the uncultivated bushes and the old statues. I noticed that all of my senses had become much clearer, sharper and I found this all very normal even if I could not explain how or why; it was if I already knew that I was there for an exact reason and so when I saw another door, I did not hesitate to enter. I was now in the kitchen, or what was left of it. It had not been used for who knows how long even if…. And then a strange feeling overcame me. For some unexplainable reason, I felt that something was waiting for me, in silence, in the dark and tedious angles of that house. (End of part one) 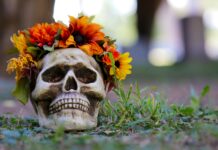